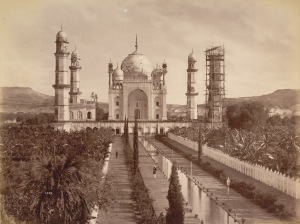 Lala Deen Dayal is known for both portraiture and landscape images. During the 1880’s he opened his first photography studio in Indore which he relocates in the late 1880’s after making a photographic tour of north and central India (“Raja Deen Dayal and Sons: Photographing  Hyderabad’s Famine Relief Efforts”). He also opened a portrait studio in Bombay. In 1894 the Nizam of Hyderabad appointed Dayal the official Nizam photographer, giving him a monthly salary (“Raja Deen Dayal and Sons:Photographing Hyderabad’s Famine Relief Efforts”). The Nizam wrote a poem which is translated here from Urdu:

“In the art of picture making

A master even of masters

Dayal’s association with the Nizam and his access to affluent people are probably the reason they stayed at the forefront of scholars minds. Regardless, he has earned his place as an influential nineteenth century Indian photographer because of the talent he possessed with photographic materials and dynamic compositions.